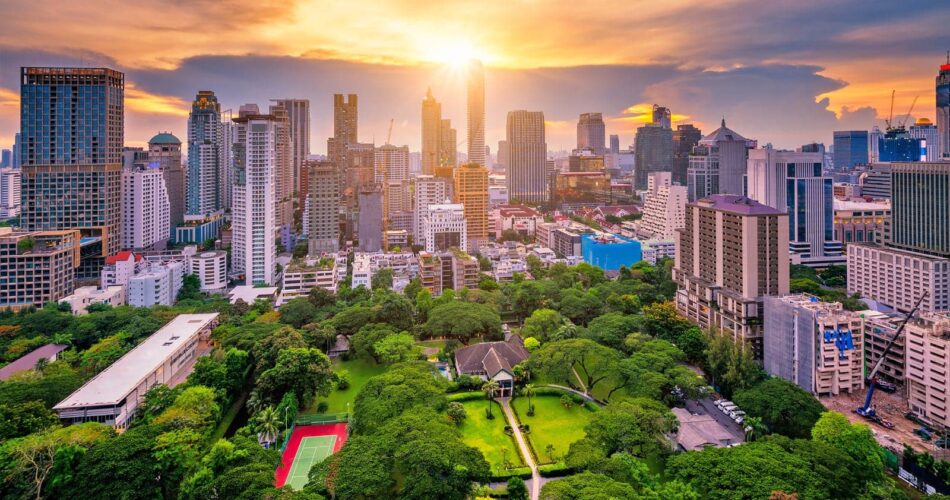 Bangkok is the capital of Thailand and its biggest city simultaneously, with a population that counts over 8 million people, almost 13% of the country’s whole.

The city developed considerably during the 1960s and 1970s and is now the center of Thailand’s political, economic, educational, and modern society.

Bangkok finds itself one of the top tourist destinations and has been the most visited city globally in the last four years, as mentioned in several international rankings.

Being a place where both nightlife and Buddhist temples meet, the city is famous for its dual nature. From shopping or clubbing to meditation, there’s always something to do! But where to begin?

The full name of Bangkok is actually the world’s longest place name, as it consists of 168 letters, and it translates to “City of angels, great city of immortals, magnificent city of the nine gems, the seat of the king, city of royal palaces, home of gods incarnate, erected by Vishvakarman at Indra’s behest.”

Being called the city of angels, we can naturally understand why the religious side plays such a big role in creating and defining this space’s identity.

Monks live in temple complexes and usually wake up at 4 am to complete rituals that will ensure a better fate in the next life, so if you are an early-bird, maybe you will get the chance to see them around in their saffron-like robes.

The best time to visit the temples is the morning because it is less crowded, cooler, and the light complements the architecture this time of the day.

Built on the Grand Palace grounds, The Temple of Emerald Buddha is the most visited and important temple in Bangkok.

Here you can find the Emerald Buddha, a 66cm-sculpture made of jade and clothed in gold of the ancient Indian religious leader, Gautama Buddha.

Furthermore, the temple offers for exploration a splendid 2km-long mural gallery accurately presenting 178 scenes of “Ramayana,” a piece of Indian epic poetry. The temple closes after 3.30 pm and has a very clear dress code: short pants and sleeveless shirts are not allowed.

Named after an Indian monastery where Buddha is believed to have been living, this temple shelters a 43m-long and 15m-tall image of Buddha covered in gold leaf.

The place is 10 minutes away from the Grand Palace, so make sure you visit it as well if you plan to see the Temple of Emerald Buddha!

The dress code is just as strict here: no exposed shoulders or skin above the knee, and you will have to take your shoes off when you enter. The restrictions are worth it, though, because the site offers to visitors four chapels containing 394 gilded Buddha images and magnificent walkways covered in detailed murals.

Wat Pho is now known as a center for traditional medication and massage, but it was the first public university in Thailand, specializing in science, religion, and literature.

Temple of The Dawn (Wat Arun)

Wat Arun is probably the most impressive temple of Bangkok, thanks not only to its design, that differs from the other temples you can visit in the city but also to its riverside location.

The temple is directly opposite to Wat Pho and Wat Phra Kaew, and it can be easily accessed by ferry. The temple’s distinctive shape consists of a central tower (“prang”), which is 70 meters high, surrounded by four smaller towers.

The central prang can be climbed, should you wish to. You can see the Chao Pharya River and the two opposite temples aforementioned when you reach the highest point.

Named by CNN as the best street food city in the world, Bangkok is the paradise of gourmands! No matter where you look, no matter the time, temptations are around every corner, waiting for you to indulge.

Probably the best neighborhood to get food is the Yaowarat Road area in Chinatown. Sometimes you might have to wait up to 5 hours for a seat at a restaurant table, but your taste buds will most definitely thank you!

Some of the best places to eat are Khao Gaeng Jake Puey, Wattana Panich, Pe Aor Yum Goong, and Raan Jay Fai. Make sure to try Pad Thai and tom yum goong, the most important dishes of Thai cuisine.

There is no other city in the world that can claim to have more rooftop bars than Bangkok! Enjoy delightful cocktails and a stunning 360° view of the city in some of these places for a memorable evening: Vertigo – Banyan Tree Bangkok, Sky Bar – Iebua at State Tower, Zoom Skybar – Anantara Sathorn.

Bangkok is well-known for its wide range of markets: from food markets and weekend markets to floating markets and night markets, there seems to be one for everyone’s liking.

Visiting markets is a great way to experience the local culture, and you can find about anything you can possibly imagine for reasonable prices.

You should definitely visit the Talat Rot Fai, the Neon Night Market, and the Sampeng Market.

However, if you’re into more organized and less overwhelming shopping areas, Bangkok offers over 40 shopping malls for you to discover! Icon Siam Shopping Mall is known as Bangkok’s “Mother of all malls,” because it hosts 500 shops and 100 restaurants from more than 30 different countries. Here you can also find stores of high-end brands, an art gallery, a stunning riverside location, and an indoor floating market.

All in all, Bangkok is a city with a vast cultural heritage that can stir anyone’s interest. It’s a place where tradition and modernity meet, forming the most beautiful whole.

With its increasing popularity, the city is also bound to become a top destination on any traveler’s bucket list.

What do you want to visit first? Have you booked your trip yet?

The Most Romantic Restaurants in the World